Using a MongoDB University course as a social and education activity

A while back ago, I worked for a Swedish consultancy firm called Squeed. Squeed has really nice inspiring people and a flat organization with lots of possibilities. We were in the progress of establishing an office in Stockholm. As part of getting to know each other at the Stockholm office, as well as learning new technology, I pitched that we all should take a course at MongoDB University. Why? We get education material for free. We get a schedule to commit our selves to and an interesting topic to gather- and have discussions around. A big plus with MongoDB University was that there were different courses depending on language running in parallel. So for us, we had someone taking the NodeJS course, another the JAVA- or Python course and some took the .Net course. But how is it organized? How does it work and how did it turn out? Read along and I’ll try and give some insights to those questions.

The course we joined, is seven weeks in total, and when writing this, we are entering week six. We have been able to do this during office hours and every week there has been new instruction videos released within a specific subject. 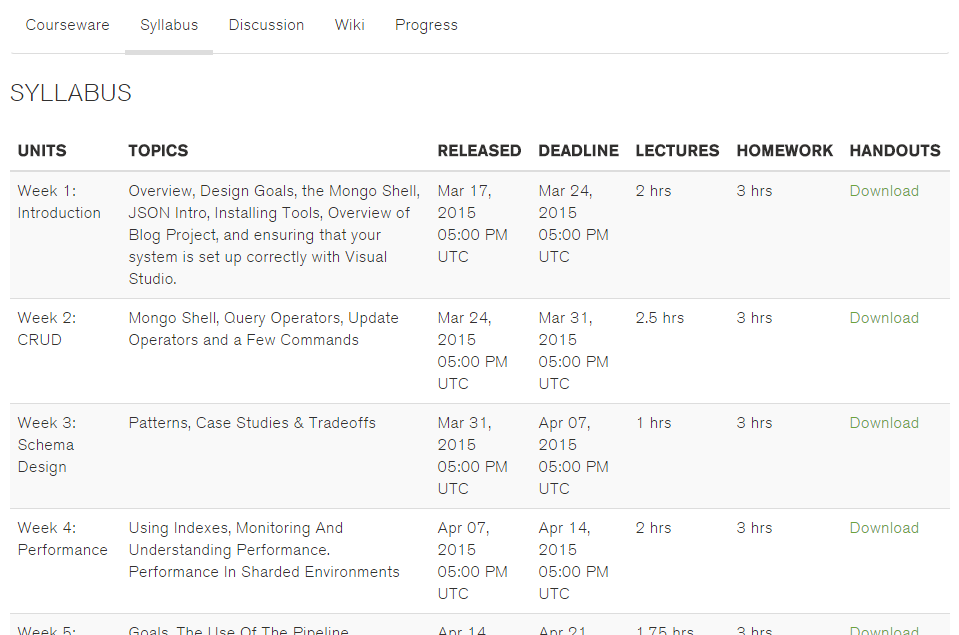 Each week new videos are released. And each video is usually just a couple of minutes long and the total amount each week varies. 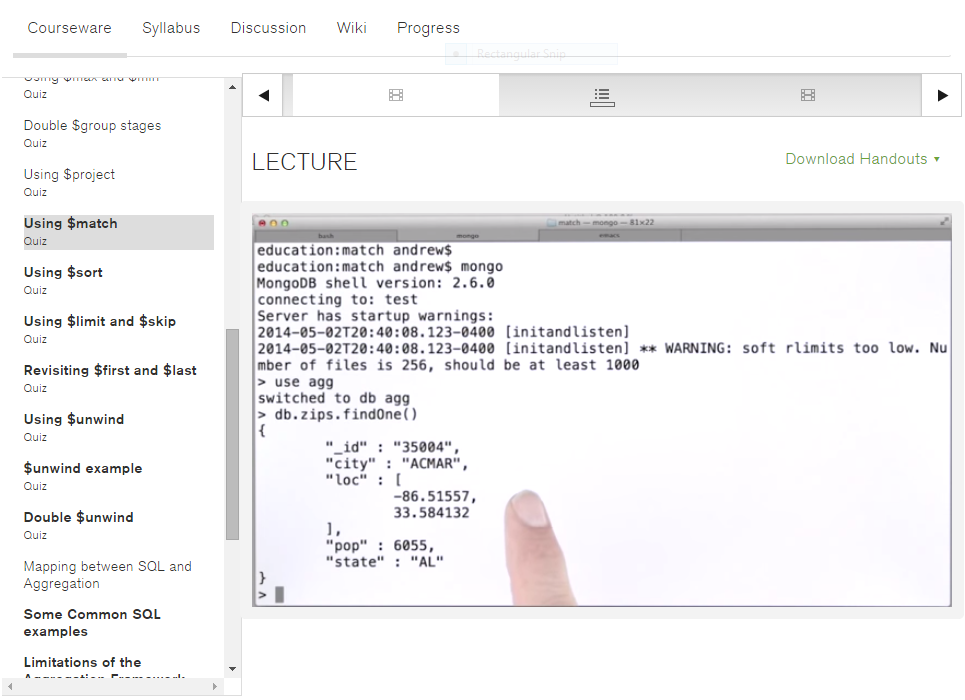 Usually there are some lecture notes associated with the video. Some of them covers mistakes made by the teacher as well as some nice informative text and tips.

Almost each video has a small, optional quiz (not part of the final grade) and associated answer/explanation (video/text). The purpose is to help you confirm that you follow along and understand what has been covered by each video. 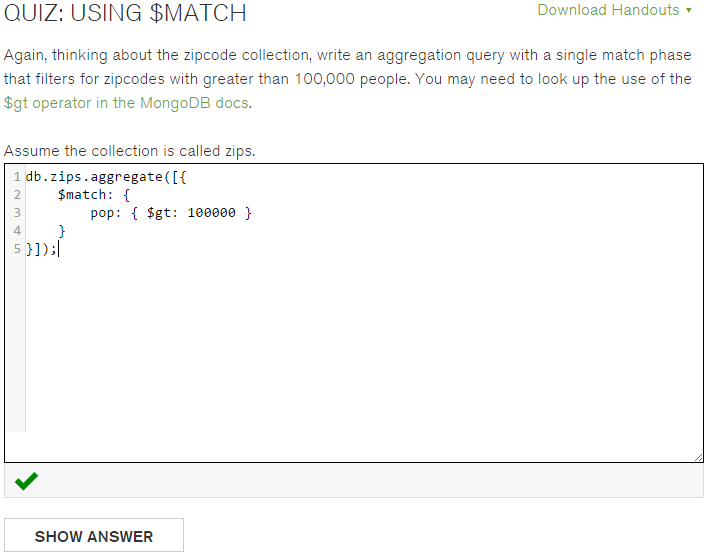 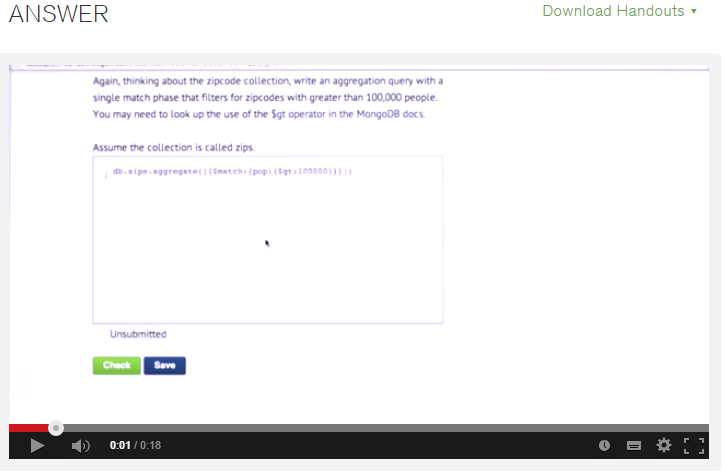 Now, I would lie if I said there aren't flaws in the material. There has e.g. been some quiz requesting a certain collection name, where the answer is expecting another, but in the whole, I think it’s a nice set-up and provides a good model to get discussions going. 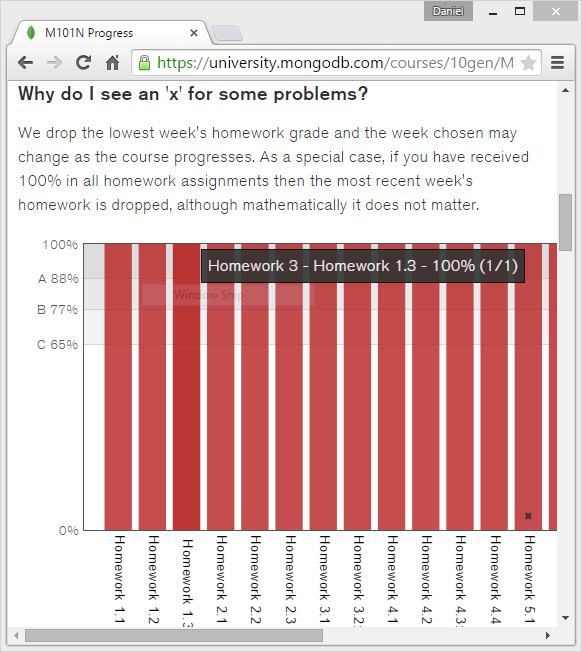 Each week there are some assignments. Some you can complete in the browser. Some you need to use the console to import and query some data in MongoDB, so that you can answer a question in the browser. To some assignments you just need to add a few lines to an existing ASP.Net MVC application and then run a verification application against it. The feedback is instantaneous. You have three attempts for each assignment.

In general it’s a smooth process and the assignments are well balanced to the course. It has some flaws though. One week there was stuff missing, but this was quickly fixed. Another week the provided dump gave errors on import due to duplicate keys, but the assignment could be completed anyway.

Feelings and thoughts so far

Without yet having reached the end of the course. I think it works great as a study-group experiment, where you look at the videos together and discuss around them, and then finish the assignments individually at home. I like that it’s only seven weeks and you can really cope up with the time needed for each week. There seems to be a good balance in lectures vs assignments. The level of the course is really introductory. I would be able to recommend it to others and there’s a high probability that I will continue and take another course.

Even though the course is free, I do not approve on having handouts that are not complete of fully functional for finishing assignments. That tells me they haven’t tested it them selves and that’s not OK.

I would have liked a better experience on the smartphone, as the site really doesn't work there. And it would be great to look at some videos while commuting to work.

Again. All, in all, I think the course has played out nicely. And if you know about similar courses, feel free to leave a comment below. I would also gladly hear about suggestion of other formats for internal education activities at work do you find working well.